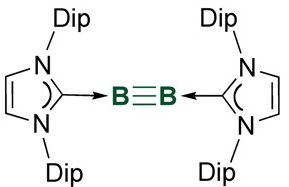 Title:  Ambient-Temperature Isolation of a Compound with a Boron-Boron Triple Bond

Take-home Importance According to the Authors:  Homoatomic triple bonds between main-group elements have been restricted to alkynes, dinitrogen, and a handful of reactive compounds featuring trans-bent heavier elements of groups 13 and 14. Previous attempts to prepare a compound with a boron-boron triple bond that is stable at ambient temperature have been unsuccessful, despite numerous computational studies predicting their viability. We found that reduction of a bis(N-heterocyclic carbene)-stabilized tetrabromodiborane with either two or four equivalents of sodium naphthalenide, a one-electron reducing agent, yields isolable diborene and diboryne compounds. Crystallographic and spectroscopic characterization confirm that the latter is a halide-free linear system containing a boron-boron triple bond.

Take-home Importance According to the Blogger:  I am again very impressed by the illustration of a very simple synthetic principle–“You can’t make it yet? Give it more energy.” Although the structure and the approach are both very straightforward, synthesis and subsequent characterization can take quite a bit of work. This work is at the very forefront of what we call fundamental research.

Tidbit from the Blogger:  First, there is a pretty interesting (or somewhat controversial) story about a rather significant application of research in real life in a previous issue of science.  I will let you decide if the rest is worth your time or not. Personally, it was rather inspiring. Second, I am very impressed by the recent development in the Chinese manned space program. Sometimes I wonder if science can be a force uniting people around the world for a common goal, but so far I only see furious fighters trying to stay ahead of competitions.

For some chemistry related thoughts, if you have not had your recent dose of JACS, things are going quite…funny? First, theorists are claiming the existence of Zn’s formal +3 oxidation states (DOI: 10.1021/ja3052409). I would respond by saying, “Great, I will believe you when you make it.” Second, experimental data is suggesting that fluoride ion can be a better reducing agent than iodide ion in non-aqueous solvent by forming fluorine radicals (DOI: 10.1021/ja303173n). Similarly, if the fluorine radical cannot be isolated (which the authors are claiming reaction with the glassware), I will remain skeptical about their conclusions. Although I would like to remind all chemists that from your freshmen chemistry book, a Lewis base is a molecule that can donate LONE PAIRS of electrons. Electrochemical reduction potential can be correlated to Lewis basicty when considering a donation of LONE PAIRS. Good reducing agent but a poor base? Authors here are using one.

If I have not mentioned theorists calculating carbon-carbon quadruple bond (10.1038/nchem.1263) earlier this year, I will mention again. Sometimes for a synthetic chemist, it is gut-instinct to ask, “Can I make it?” The case of boryne, a triple bond between two boron atoms, holds true.

If you look at the Lewis dot structure of boron, three unpaired electrons, and of nitrogen, three unpaired electrons. Boron and nitrogen can sit together with a triple bond and form a nice octet for the nitrogen side, but the boron side will not be too happy as it is clearly electron poor. Well, it is a stable nitrogen molecule analog, but you are making it super unhappy by ripping a lone pair from one side. A likely results would be reacting with surrounding molecules and losing the high electron density in the triple bond. In the compound boron nitride, instead of a linear geometry, electron density was delocalized in a graphite-analog of fused six-membered rings, which helps the compound to de-stress by going to sp2 hybridization. When borons form three single bonds, BH3 or BF3 for example, the species is a good Lewis acid, where it can accept a lone pair of electrons to become more stable. Borons with four bonds can be fairly stable, such as BF4– non-coordinating counter ions that usually like to be alone in aqueous solution. (However, if you start to boil an aqueous solution containing BF4–, take heed that the fluoride ion will dissociate and you get HF by proton extraction from water. Then you might lose your glassware, if not something else, not a fluorine radical hopefully. You have been warned.)

But, if we can supply a large electron density to the boron side without forming a bond, the boron-nitrogen could actually be quite happy. We may even make boron-boron triple bond by supplying both side with a lot of “nonbonding” electron density, and the corresponding product should be stable, at least we think so as chemists. Previous work has demonstrated both alkyl and NHC (N-heterocyclic carbene, a member of stable carbenes) substituents could successfully stabilize a boron-boron double bond (diborene), which implied that with the right modification, it was possible to stabilize a boron-boron triple bond (diboryne). In this case, starting from tetrabromodiborane, a boron-boron single bonded species, reduction in the presence of stabilizing NHC (large side arms of 2,6-diisopropylphenyl) allows removal of bromide from the borane center (as forming charge neutral Na-Br), consequently generating dibromodiborene after two equivalences of reduction and finally diboryne after four equivalences of reduction. The diboryne was then characterized and its existence verified via 11B NMR, IR, and single-crystal structure. Reaction of the boryne with tetrabromodiborane resulted in full conversion to dibromodiborene via comportionation (opposite of disporportionation). The diboryne is also thermo-stable till 234 degrees Celsius.

The authors also claimed that this result would contribute to the knowledge of boron-based functional material, which people always do to justify their use of taxpayer money for research (and it is a good thing).

But in this case, no one has ever made a boron-boron triple bond and it is just so COOL, BEAUTIFUL, and AWESOME.

Would you really need a reason to do that chemistry?